In Chinese Calendar Science, the calendar years are described in 10 Heavenly (or Celestial) Stems 天干and 12 Earthly (or Terrestrial) Branches 地支. The combinations make 60 unique calendar years, and the 60-year cycle repeats itself continuously. This calendar system is the foundation of Chinese astrology, horoscope, and philosophy. The 12 zodiac animals are the representatives of the 12 Earthly Branches, therefore the zodiac analysis is closely associated with all studies that depend on Chinese Calendar Science.

(These Chinese words are originally pictorial characters depicting and describing natural phenomenal due to season changes, such as 'tree growing tall', etc. They are later used as ordinal numbers 1 to 10, or an equivalent of the alphabetic order of A to J).

(These Chinese words are also originally pictorial characters depicting and describing natural phenomenal of the time changes. They can be interchanged with their corresponding zodiac animals in tracking the hour of the day.) 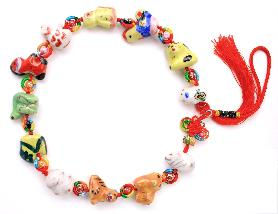 So if a person is born in the Year of Tiger, he may have Dog for the birth Month, Snake for Day, and Rabbit for Hour. It is said that he will have the traits and personalities resembling Tiger, Dog, Snake and Rabbit. But overall at a glance, he will be perceived as a Tiger, his most apparent traits.

To analyze the details of each attribute in addition to the associated Yin-Yang and 5-Element factors, it can get very complicated. If you are interested in getting a more accurate reading using Chinese Horoscope, or in learning more about Chinese Calendar Science, go to Chinese Fortune Calendar's website.

Is It Rat or Mouse